"Whosoever slays an innocent person ... it is as if he had slain humankind altogether." The Holy Quran (5:32) 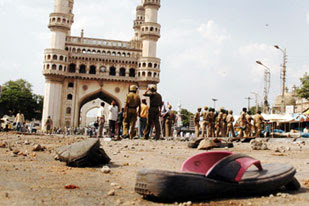 The above verse of the Holy Quran has nothing to do with the religion of the person or persons involved. Perhaps I should also find some verse or verses from the Holy Quran stating how important it is to keep patience. Along with this, I would also take the pleasure of saying that I find no reason why I should panic. There can be a worry perhaps - of possible riots.

There is supposed to be an 'ijtema' starting from Saturday in Hyderabad where more than 1.5 million people 'were' expected to attend. I had never previously - in the last last few days - thought of going there and I won't be going. I have nothing 'for' or 'against' it. But if people are taking it as an opportunity to show some form of unity among our people by attending it, then they better use some other name for the congregation and not 'ijtema'.

I have seen people talking on several things since late afternoon. None of these conversations had any intention of finding any resolutions. I received several messages of phone but none reminded me of how our prophet Muhammed (pbuh) kept patience even when he was abused and attacked. No message told me that Hazrath Hamza (may Allah be pleased with him) fought a great battle within himself - not responding to the atrocities of the pagans.

After seeing people pelting stones standing at the gates of a mosque at the policemen, I wonder what difference is left between the ones who kill innocent humans and these people. Those who kill innocents, kill the humanity; those who 'use' a mosque for barbaric acts kill the honor of Muslims. I do not support people who do not support peace. I follow a peace loving religion.

They say a 'bandh' will increase the intensity of the protests people are carrying out. The person responsible for guiding this 'bandh' will be accountable for every pain that the citizens will be made to suffer as a direct or an indirect consequence of it. Allah has the knowledge of everything and surely there is nobody who can match that. He is the Merciful and the Master of the day of judgment. People tend to forget this.
Posted by xubayr at 2:43:00 PM